How to get to Sham Shui Po

Being centrally relocated on Kowloo Peninsular it is easy to get to and from Sham Shui Po via the many different types of public transport that run through the district. The main and best way is always the MTR, Hong Kong's excellent clean and efficient underground railway system which is can be boarded at Sham Shui Po MTR station.

There are also many bus routes that run through the area and these provide good access to many other important destinations including Central, Shatin and the Airport.

Here are a few of the main routes.

By far the easiest way to make this trip is via the MTR, with a line running directly between Central MTR Station and Sham Shui Po MTR Station there is no room for confusion, traffic jams won't make any difference and at only $10 per person it could hardly be more economical. 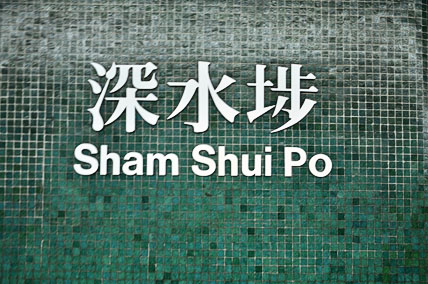 The correct line to take is the Tsuen Wan Line, so when  you enter the MTR station in Central look for signs that point to that. It is one level down from the Island line so continue taking escalators down until you have reached the lowest level which is where the Tsuen Wan line starts so often trains will already be waiting in the station to fill up.

Many stations on the MTR system have distinctive coloured tiling which makes it easy to notice you have reached the correct place to get off the train, and in the case of Sham Shui Po the tiling is dark green as pictured.  When you see this then leave the train and take the escalators up to street level. Consult the in-station maps to see which is the most appropriate for your final destination, for example exit D1 is best for Apliu Street Flea market.

An alternative to the MTR for those who would like to look out of the window as they travel is NWFB Bus 905.  Catch the bus on Des Voux Road in Central outside the disused Central Market Building, opposite the Hang Seng Bank Headquarters building, and alight at least 10 stops later, but depending on where you want to go in the district perhaps more. To go as far as the Sham Shio Po MTR station, convenient for Apliu Street, then it is a total of 16 stops from Central on the bus.  Busses leave ever 4 to 8 minutes during the day time and cost $9 per person.

At around HK$230 not including luggage charges a Taxi is the best direct way to get you door-to-door from anywhere in Sham Shui Po to the airport. A good deal if more than two people are travelling together it is worthwhile considering for individuals just for the convenience.  The route is very direct with little chance of traffic or other holdups, it is a short drive from anywhere in the district to the highway and once on the West Kowloon Highway and then the Lantau North Highway it is a fast roast all the way to the airport building.

An excellent alternative is to take the train, with the trains starting at Nam Cheong station on the Tung Chung Line taking you to Tsing Yi where you can change to the AirportExpress which goes directly into the departure hall at the airport.  Although slightly more expensive per person this is a great choice for convenience and arriving directly into the airport building.

As the Nam Cheong station is far to the western side of the district if you are in the centre part and nearer to Sham Shui Po MTR station then instead enter the system there and take the Tuen Wan Line until you arrive at Lai King, change trains to the Tung Chung line and take that to Tsing Yi for the Airport Express.  Either way is fast and easy, with the changes very conveniently laid out, there are no long walks on these changes.

Finally there is an Express Bus service which may be perfect for this trip if you don't have too much luggage. Stopping several places in Sham Shui Po including Bute Street, Maple Street, Pei Ho Street and Yen Chow Street the E21 Express Bus from CityBus will go all the way to the Passenger Terminal Building at the Airport.  The bus runs ever 12 to 20 minutes and costs just HK$14 per person, making it the cheapest option but travelers should allow up to one hour to complete the journey.

From Happy Valley, whether it be the race course or the residential area, to Sham Shui Po is best done by bus. There is a very direct line that connects the two districts via the Eastern Harbour Crossing Tunnel.  Board the NWFB Bus 117 outside the Race Course, or lower down at Canal Road West which is just beside the Time Square mall.  The bus then crosses the harbour and arrives in Kowloon in Hung Hom before taking Gascoigne and then Nathan Road. Leave the bus when it returns to the smaller roads in Sham Shui Po at Nam Cheong Street or Kweilin Street which are convenient for the Flea Market and the MTR station.

Populated for at least 2000 years according to archeological evidence the history of Sham Shui Po is long and deep but poorly documented. Having been a poor area for much of the 20th century little attention was given to it but now that has become developed and busy, though still not as prosperous as some other parts of Hong Kong, people have begun to seek it's history.

Originally a coastal settlement before reclamation brought it inland it was close to the important peninsular of Tak Kok Tsui with it's Cosmopolitan Dock, now since long gone of course. The last of the connection with the sea disappeared in the 1970s when the Nam Cheong Street nullah, or concrete stream, was covered over and today all that remains of it is the wide street which now runs past the open green park.